Tickets On Sale Starting Friday, August 5 at 10AM

TICKETS: Tickets go on sale starting Friday, August 5th at 10am local time on RandyRainbow.com/tour
Locally, tickets will be available online only at ppacri.org on August 5th at 10AM.
Phone and window sales begin Tuesday, August 9th at 10AM.
The PPAC Box Office is located at 220 Weybosset Street in downtown Providence. Phone: 401.421.2787

Touring the U.S. to sold-out crowds, the inﬂuencer and Internet sensation's viral comedy videos have received hundreds of millions of views across all social media and digital platforms. His fresh take on politics and current events has led to interviews and proﬁles by such venerable media outlets as The Washington Post (magazine cover story), The Hollywood Reporter, CNN, NPR, ABC News, OUT, People, and Entertainment Weekly. American author and media pundit Dan Savage called him "the best thing to come from the GOP race." In a recent article, Forbes Magazine pondered, "Why Randy Rainbow, The Muppets, and The Avengers Should Host the Oscars." As the Washington Post noted, Randy Rainbow has found his spotlight through the Internet, emerging as a viral sensation who dispenses musical-comedy salve for a divided nation. His new memoir Playing with Myself was published on April 19, 2022 and is available for purchase HERE. 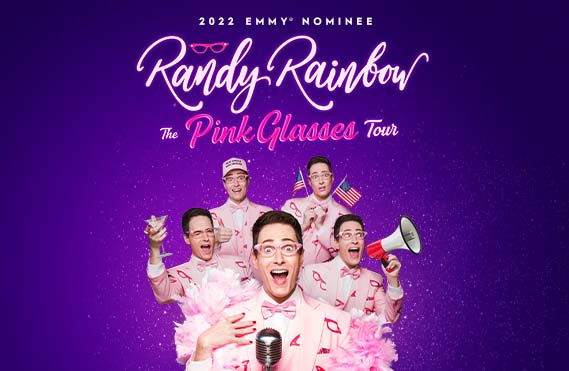