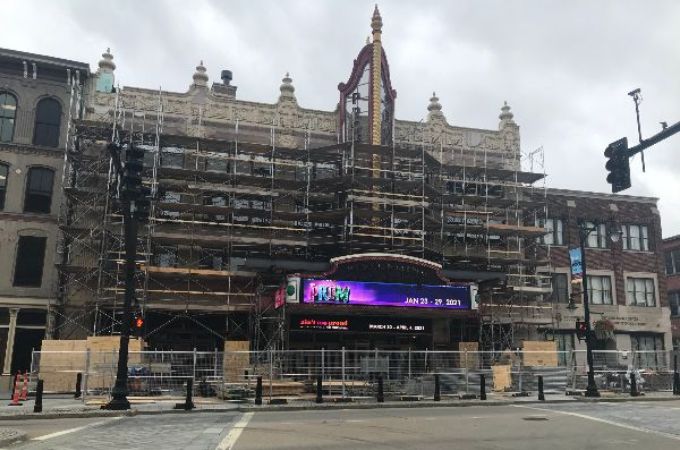 Providence, RI – J.L. “Lynn” Singleton, President and CEO of the Providence Performing Arts Center (PPAC), is pleased to announce that work on the Theatre’s Weybosset Street façade restoration project has begun. The Loew’s Theatre Building, designed by the renowned architectural team of George and C.W. Rapp, opened as the Loew’s State Movie Palace on October 6, 1928 and is now widely known as PPAC. The Theatre has been listed on the National Register of Historic Places since 1977 and its façade has withstood decades of wear and harsh New England weather, including a number of major storms, most notably the New England Hurricane of 1938 and Hurricane Carol in 1954.

This project will restore the terracotta façade to its original beauty and grandeur.

“We are very excited to begin this long-awaited restoration endeavor,” said PPAC General Manager Alan Chille. “Given that the building is 92 years old and has not had a façade restoration during that entire time, we are looking ahead to the future, while carefully considering the past, with our restoration of the front of the building.”

The façade restoration is expected to take five months to complete and is projected to be ready in time for the National Tour Launch of THE PROM in late January 2021.

Funding for the project comes from PPAC’s theatre restoration fees and grants from The Champlin Foundation and the Rhode Island Historical Preservation and Heritage Commission.