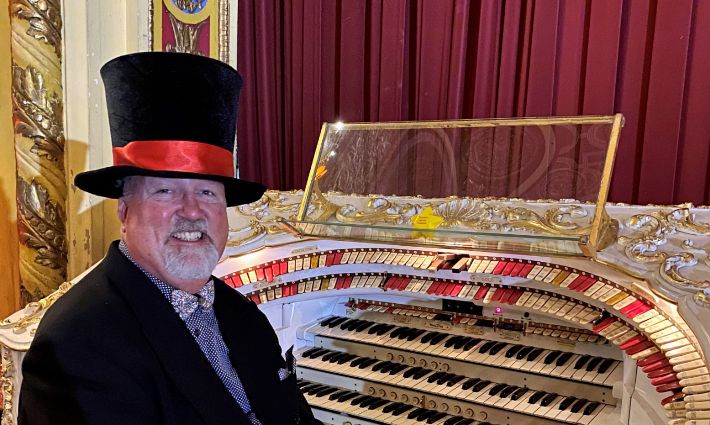 Providence, RI – J.L. “Lynn” Singleton, President and CEO of the Providence Performing Arts Center (PPAC), is pleased to announce that world-renowned organist and silent film accompanist Peter Edwin Krasinski will be the Theatre’s House Organist. Mr. Krasinski will be PPAC’s first house organist in 22 years. The position was previously held by Lincoln W.N. Pratt from 1982 until his passing in 1998.

Mr. Krasinski will play PPAC’s house organ, known as “The Mighty Wurlitzer,” prior to future performances and at community events, like PPAC’s ARTS Showcase series and the Wonders of the Wurlitzer concert series.

“I am thrilled to be named as the successor to the previous official PPAC (Theatre) organist – it is both an honor and a privilege,” said Mr. Krasinski. “I intend to showcase this rare and magnificent pipe organ in new ways for a variety of audiences to appreciate! The pipe organ is enjoying a renaissance, not only in the United States, but in venues worldwide. I am excited that PPAC will be a part of that.”

“We have worked with Peter for a number of years during our Wonders of the Wurlitzer concert series. Peter has also played the house organ at our 90th anniversary celebration in October 2018 and during the OpenDoors RI event in February 2020,” said PPAC General Manager Alan Chille. “Peter’s passion and love for the Wurlitzer is apparent whenever he plays, and we are looking forward to hearing Peter fill our venue with beautiful music for many years to come.”

Peter Krasinski is broadly recognized as a conductor, organist, and music educator, whose imaginative and energetic performances elevate and inform audiences. Along with regular concert appearances, he specializes in live improvised silent film accompaniment, worldwide. He has premiered the art in major venues in North America, Europe, and Asia. He is the recipient of several prizes, including the First Prize in Improvisation from the American Guild of Organists (AGO) National Competition.

Mr. Krasinski was the past Dean of the Boston Chapter AGO. He is Organist at First Church of Christ, Scientist in Providence, RI, accompanist at Beth El Temple Center in Belmont, MA and recently presented Master Classes at the Sibelius Academy in Helsinki, Finland. He holds both a Bachelor of Music Degree in Music Education and Organ Performance, and the Master of Sacred Music Degree from Boston University.

PPAC’s “Mighty Wurlitzer” was built in 1927 and has five keyboards and twenty-one ranks and percussion that can produce many orchestral sounds, as well as sound effects that can be utilized when accompanying silent films. The PPAC “Mighty Wurlitzer” is one of only three five-manual keyboard consoles built by Wurlitzer. Lincoln W.N. Pratt assisted PPAC in 1982 with finding the 5/21 Wurlitzer organ; the instrument was purchased by PPAC and has resided in the Theatre since 1982.

PPAC will announce information about upcoming Mighty Wurlitzer performances, including details regarding a free showing of the 1925 silent film classic The Phantom of the Opera in which Mr. Krasinski will accompany, at a later time.