“Red and Black” from Les Misérables.
Photo by Johan Persson.

HomeAboutNewsTickets for Cameron Mackintosh’s acclaimed production of Boublil and Schönberg’s LES MISÉRABLES will go on sale Wednesday, August 3 at 10A

Tickets for Cameron Mackintosh’s acclaimed production of Boublil and Schönberg’s LES MISÉRABLES will go on sale Wednesday, August 3 at 10A

The World’s Most Popular Musical will play the Providence Performing Arts Center November 15 - 20, 2022

Providence, RI -  Tickets for Cameron Mackintosh’s acclaimed production of Alain Boublil and Claude-Michel Schönberg’s Tony Award-winning musical phenomenon, LES MISÉRABLES, will go on sale on Wednesday, August 3 at 10A for its engagement at the Providence Performing Arts Center (PPAC) November 15 – 20, 2022. In Providence, LES MISÉRABLES headlines the Encore Series. Cox Media is the proud media sponsor of the Encore Series.

Tickets will be available at the PPAC Box Office (220 Weybosset St, Providence, RI 02903), by phone at 401.421.2787 and online at ppacri.org. Tickets are $20 - $124; all ticket prices include a $4 per ticket restoration charge and are subject to change without notice. Additional service fees may apply.

National tour casting will be announced at a later date.

Cameron Mackintosh said, “The phenomenon of Les Misérables never fails to astound me.  No show in history has been able to continually reinvent itself and remain a contemporary musical attracting new generations of brilliant new talent, many of whom go on to international stardom. No show in the world has ever demonstrated the survival of the human spirit better than Les Miz, and it's time to let the people sing again. We are all thrilled to be Bringing Her Home to you."

★★★★★ “This reborn dream of a production looks and sounds fresher than ever. Sends shivers of excitement racing down the spine - You emerge feeling stirred and exhilarated.” - Daily Telegraph

“One of the greatest musicals ever created.” - Chicago Tribune

“The defining musical of the last 50 years.” – BroadwayWorld

“Les Mis for the 21st Century.” – The Huffington Post

Set against the backdrop of 19th century France, LES MISÉRABLES tells an enthralling story of broken dreams and unrequited love, passion, sacrifice and redemption – a timeless testament to the survival of the human spirit. This epic and uplifting story has become one of the most celebrated musicals in theatrical history.

Boublil & Schönberg’s magnificent score of LES MISÉRABLES includes the classic songs “I Dreamed a Dream,” “On My Own,” “Bring Him Home,” “Do You Hear The People Sing?,” “One Day More,” “Master of the House” and many more.  Seen by over 130 million people worldwide in 53 countries and 22 languages, LES MISÉRABLES is undisputedly still one of the world’s most popular musicals.

To date, LES MISÉRABLES remains the 6th longest-running Broadway production of all time.

Since Cameron Mackintosh first conceived this acclaimed new production of LES MISÉRABLES in 2009 to celebrate the show’s 25th anniversary, it has taken the world by storm continuing to enjoy record-breaking runs in countries including North America, Australia, Japan, Korea, France and Spain. It’s currently on tour in the UK and Ireland, and a new tour of The Netherlands is set for early 2023 with further productions to be announced. The most recent North American production relaunched its national tour in 2017 at the Providence Performing Arts Center in Providence, RI and toured from 2017 to March 2020, playing 94 engagements until the production was halted due to the global pandemic.

Cameron Mackintosh’s production of LES MISÉRABLES is written by Alain Boublil and Claude-Michel Schönberg and is based on the novel by Victor Hugo. It has music by Claude-Michel Schönberg, lyrics by Herbert Kretzmer and original French text by Alain Boublil and Jean-Marc Natel, additional material by James Fenton and adaptation by Trevor Nunn and John Caird. Orchestrations are by Stephen Metcalfe, Christopher Jahnke and Stephen Brooker with original orchestrations by John Cameron. The production is directed by James Powell and Laurence Connor, designed by Matt Kinley inspired by the paintings of Victor Hugo, with costumes by Andreane Neofitou and Christine Rowland, lighting by Paule Constable, sound by Mick Potter, projections realized by Finn Ross and Fifty Nine Productions, musical staging by Geoffrey Garratt, and music supervision by Stephen Brooker and James Moore.

Connect with PPAC online at
www.ppacri.org

Connect with LES MISÉRABLES online at: 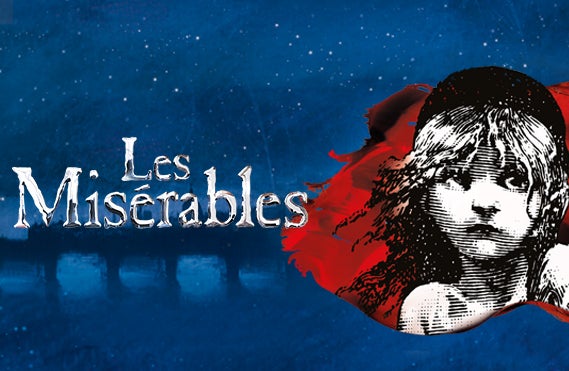 Part of the Encore Series