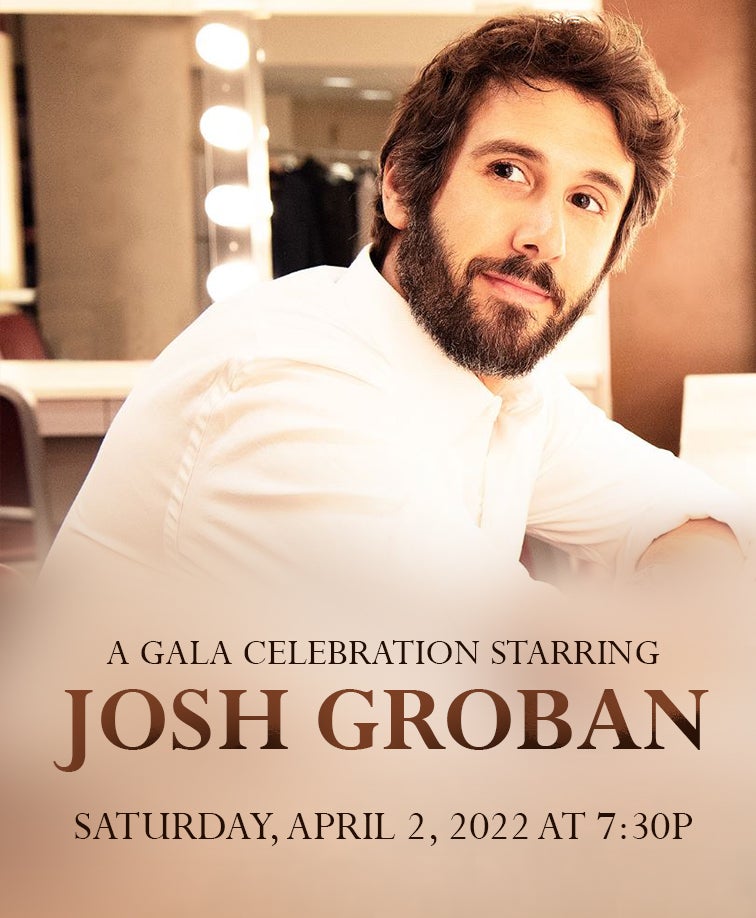 Providence, RI – J.L. “Lynn” Singleton, President and CEO of the Providence Performing Arts Center (PPAC), is delighted to announce that the theatre will hold A GALA CELEBRATION STARRING JOSH GROBAN on Saturday, April 2, 2022. The concert will begin at 7:30P.

Tickets for A GALA CELEBRATION STARRING JOSH GROBAN will go on sale to the general public on Monday, September 20, 2021 at 10A at the PPAC Box Office (220 Weybosset Street in downtown Providence), online at ppacri.org, and by phone at 401.421.ARTS (2787). Tickets are $175 - $49; all ticket prices include a $4 per ticket restoration charge and are subject to change without notice. Box Office phone and window hours are Monday through Friday, 10A to 5P.

PPAC does not have any capacity restrictions; all event staff are fully vaccinated. PPAC is a GBAC STAR® accredited performing arts venue, indicating that the theatre has adopted the most stringent protocols for cleaning, disinfection, and infectious disease prevention. PPAC is following current COVID-19 health and safety guidelines as recommended by the CDC and state government (PPAC’s COVID-19 Safety Measures can be accessed here).

Tony®, EMMY®, and four-time GRAMMY® Award-nominated singer, songwriter, actor, and philanthropist Josh Groban possesses one of the most outstanding and instantly recognizable voices in music. Moreover, he continues to captivate fans everywhere as both a powerhouse vocalist and dynamic renaissance man. He has sold over 35 million albums worldwide, headlined legendary venues on multiple continents, and entertained audiences with acclaimed film and television appearances. His catalog spans a series of chart-topping blockbuster albums, including Josh Groban (5x-platinum), Closer (6x-platinum), Noël (6x-platinum), Awake (2x-platinum), Illumination, All That Echoes (gold), Stages (gold), his first UK #1 album Bridges, and his most recent release, Harmony. Along the way, he packed arenas throughout North America, Europe, Australia, New Zealand, and Asia.

Extending his repertoire, Groban made his Broadway debut in 2016 with a starring role in Natasha, Pierre & The Great Comet of 1812. He garnered a Tony® Award nomination for Best Lead Actor In A Musical. He has expanded his presence with appearances on Glee, The Simpsons, The Office, CSI: NY, It’s Always Sunny in Philadelphia, and The Crazy Ones as well as in the feature films Coffee Town, Muppets Most Wanted, and Crazy, Stupid, Love. In addition, he starred in the NETFLIX series The Good Cop in 2018. Groban maintains his position as the consummate American showman in 2022 and beyond. This year, he returns to the hallowed stage of Radio City Music Hall for his Great Big Radio City Show residency and launches a nation-wide live tour. Groban remains an active arts education philanthropist and advocate, and his Find Your Light Foundation helps enrich the lives of young people through arts, education, and cultural awareness.

About PPAC
The Providence Performing Arts Center (PPAC) presents national touring Broadway productions and contemporary engagements. Broadway will be back for the 2021/2022 Season in October 2021 with the national tour launch of PRETTY WOMAN: THE MUSICAL, followed by a return engagement of HAMILTON, and a full line-up of shows.  Located in the heart of Providence’s arts and entertainment district, PPAC is the second largest theatre of its kind in the country. The Loew’s Theatre Building, which is the historic home of PPAC, opened in October 1928 and has been applauded for its beauty and grandeur. PPAC is listed on the National Register of Historic Places and has been ranked by Pollstar as one of the Top Venues in the world. PPAC is managed by Professional Facilities Management and is the home of their corporate office.