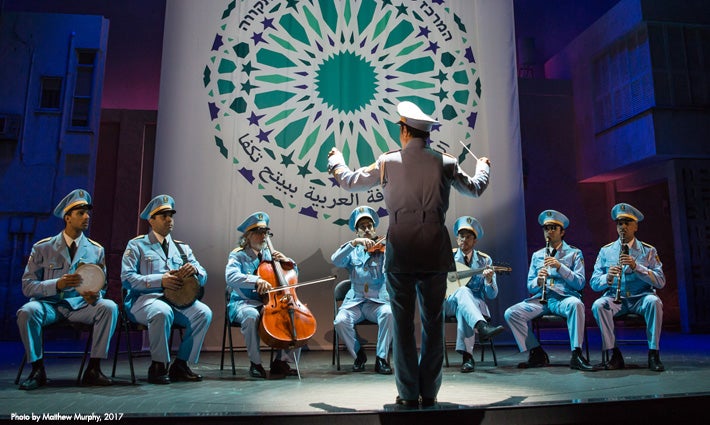 Sasson Gabay and Chilina Kennedy Cast in The North American Tour of THE BAND'S VISIT, opening at PPAC June 25 - 30, 2019

Providence, RI  — Producers announced today that award-winning Israeli film actor Sasson Gabay will reprise the role of “Tewfiq” in the upcoming North American tour of the 10-time Tony® Award-winning Best Musical, THE BAND’S VISIT, the role he created in the 2007 film of The Band’s Visit and most recently played on Broadway. Joining him for the tour is critically acclaimed actress Chilina Kennedy in the role of “Dina.”

The Israeli star of stage, TV and screen, Sasson Gabay recently received the Lifetime Achievement Award for his contribution to Israeli cinema at the Israeli Film Festival. Gabay is one of the most respected and outstanding actors in Israeli film with work spanning five decades, including some of Israel's most popular and critically-acclaimed films as well as international hits such as Rambo III, Gett: The Trial of Viviane Amsalem, Delta Force One: The Lost Patrol and The Band's Visit (Israel's top-grossing film in the US).

Chilina Kennedy is known for her role as “Carole King” in Beautiful: The Carole King Musical on Broadway. She has starred as “Mary Magdalene” in Des McAnuff’s Broadway revival of Jesus Christ Superstar and headlined many productions around the world including, the first national tour of Mamma Mia!, Atlantic Theater Company’s This Ain’t No Disco and three seasons at the Stratford Festival, including “Maria” in Gary Griffin’s West Side Story.

“We are honored to have Sasson Gabay and Chilina Kennedy headline our national tour. Very rarely in the history of Broadway has an actor originated a role on film, played it on Broadway and then continued with the tour. This speaks to Sasson’s artistry and his commitment to this particular work.” says producer Orin Wolf. “It is also fitting that he will be seen opposite Chilina Kennedy whose world class talent is already known to Broadway fans all over the world.  Seeing these two artists together promises to be one of the great theatrical events of the season.  How exciting that this has been assembled exclusively for Broadway audiences nationwide who hunger for world class entertainment.”

Sasson Gabay and Adam Gabay are appearing with the support of Actors' Equity Association.

“The producers, casting directors, and creative team have spent many months carefully building this cast for our national tour. We are excited and proud to have these wonderful actors take the story of THE BAND’S VISIT out into the world,” says director David Cromer.

Tickets are on sale now for THE BAND’S VISIT at the PPAC Box Office (located at 220 Weybosset Street in downtown Providence), online at www.ppacri.org and by phone at (401) 421-ARTS (2787). Box Office Hours are Monday through Friday, 10A to 5P, Saturday, 10A to 2P and two hours prior to curtain time(s) on performance days. Tickets start at $41; all ticket prices include a $3 per ticket restoration charge and are subject to change without notice.

THE BAND’S VISIT tells a delightfully offbeat story, set in a town that’s way off the beaten path, a band of musicians arrive lost, out of the blue. Under the spell of the desert sky, and with beautiful music perfuming the air, the band brings the town to life in unexpected and tantalizing ways. Even the briefest visit can stay with you forever.

With a Tony- and Grammy-winning score that seduces your soul and sweeps you off your feet, and featuring thrillingly talented onstage musicians, THE BAND’S VISIT rejoices in the way music makes us laugh, makes us cry, and ultimately, brings us together.

THE BAND’S VISIT world premiere opened to critical acclaim at the Atlantic Theater Company on December 8, 2016, where the sold-out, limited engagement extended twice, playing its final performance on Sunday, January 8, 2017. The show then opened at Broadway’s Ethel Barrymore Theatre (243 West 47th Street) on Thursday, November 9, 2017, and went on to play 589 regular performance and 36 previews before closing on April 7, 2019. THE BAND’S VISIT broke the all-time box office record at Broadway’s Barrymore Theatre twice.

THE BAND’S VISIT original Broadway cast album received the 2019 Grammy Award for Best Musical Theater Album. The musical is also the recipient of a 2019 Daytime Emmy Award for a performance of “Answer Me” on NBC’s “Today”.