Providence, RI – The Providence Performing Arts Center (PPAC) announced today that JESUS CHRIST SUPERSTAR will now be presented on Tuesday, August 24 – Sunday, August 29, 2021. This production was originally scheduled for March 31 – April 5, 2020, but was then postponed to September 15 – 20, 2020; the show will now be presented in August 2021. Tickets for the August 2021 engagement of JESUS CHRIST SUPERSTAR are on sale now and can be purchased online at ppacri.org or by phone at (401) 421-ARTS (2787).

Current ticket holders do not need to take any further action. New tickets will be mailed to all current ticket holders for their corresponding performance date (for example, if you had tickets for the Tuesday, March 31, 2020 performance, you will receive tickets for the Tuesday, August 24, 2021 performance). If you wish to exchange into another performance of JESUS CHRIST SUPERSTAR or need further assistance, please contact the Box Office at (401) 421-ARTS (2787) or email box_office_questions@ppacri.org. The Box Office window is temporarily closed. Summer Box Office hours are now in effect: Monday through Thursday,
10A to 3P.

JESUS CHRIST SUPERSTAR is set against the backdrop of an extraordinary series of events during the final weeks in the life of Jesus Christ, as seen through the eyes of Judas. Reflecting the rock roots that defined a generation, the legendary score includes “I Don’t Know How to Love Him,” “Gethsemane,” and “Superstar.”

JESUS CHRIST SUPERSTAR is a proven musical phenomenon with a world-wide fan base.  As demonstrated by NBC’s Jesus Christ Superstar Live in Concert, this epic work attracted over 9.6 million viewers, earned the highest ratings in its time period, and received the highest critical ranking of any live musical event on network TV. Now, almost 10 years after the last major tour in the US, this award-winning Regent’s Park production is playing in over 50 markets throughout North America.

Regent’s Park Open Air Theatre production of JESUS CHRIST SUPERSTAR won the 2017 Olivier Award for Best Musical Revival, selling out two consecutive engagements in 2016 and 2017. The production had a limited engagement in the West End at Barbican in 2019. 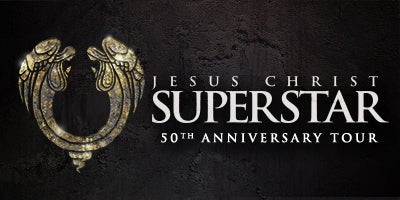