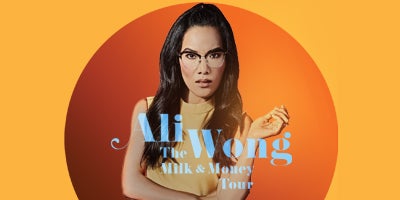 There will be a series of presale opportunities, including:

Ali Wong is a stand-up comic from San Francisco, now living in Los Angeles. Her ﬁrst Netﬂix stand-up special BABY COBRA was ﬁlmed when she was seven months pregnant. According to the New York Magazine, "The special’s arrival on Netﬂix is the sort of star-making moment that unites the tastes of the unlikeliest fans." Elle applauded it as a "comic genius gem" while Vogue called it "The special that everyone is talking about." Emily Nussbaum hailed it as "funny and refreshingly rude." The day before its premiere, Wong's interview with Marc Maron on his podcast WTF was released. He called the special "the most honest, rawest, funniest special I’ve seen in years."

She soon after became a very popular Halloween costume. Fans, both male and female, dressed up in Wong's iconic red glasses, black and white striped dress and pregnant belly. The Smithsonian has asked Wong to donate the actual dress, shoes and necklace she wore in the BABY COBRA, to the Museum of American History in Washington, DC.

Ali’s second stand-up special, HARD KNOCK WIFE premiered on Netﬂix on Mother’s Day 2018. Her feature ﬁlm, ALWAYS BE MY MAYBE, which she co-wrote and co-stars in, debuted on Netﬂix May 2019 to wide critical acclaim. In the ﬁrst four weeks, it was seen by 32 million viewers. Last Halloween, fans have continued to dress up as Wong in the striped dress, in the leopard dress and as her character, Sasha Tran, from ALWAYS BE MY MAYBE.

Tickets to see Wong headline live are now known to sell out within two minutes. She recently sold out an unprecedented 13 shows at The Wiltern in Los Angeles. Her book DEAR GIRLS: Intimate Tales, Untold Secrets & Advice for Living Your Best Life was released October 2019 and became an instant New York Times Bestseller. According to Vogue, “[Wong] spins a volume whose pages simultaneously shock and satisfy. . . . Dear Girls is not so much a real-talk handbook as it is a myth-puncturing manifesto.”

Printed proof of vaccination (at least two weeks after final dose), a negative test within 72 hours of the event, or a negative COVID-19 antigen test (also known as a rapid test) taken within 6 hours of the performance start time will be required to enter the Providence Performing Arts Center for this performance. All guests, regardless of vaccination status, are required to wear a mask covering their nose and mouth at all times while inside the venue (unless actively eating or drinking). Details are available at https://www.ppacri.org/healthandsafety

***No cellphones, cameras or recording devices will be allowed at these shows. Upon arrival, all phones and smart watches will be secured in Yondr pouches that will be unlocked at the end of the show. Guests maintain possession of their phones throughout the night, and if needed, may access their phones at designated Yondr unlocking stations in the lobby. All guests are encouraged to print their tickets in advance to ensure a smooth entry process. Anyone caught with a cellphone in the venue will be immediately ejected. We appreciate your cooperation in creating a phone-free viewing experience.

About the Providence Performing Arts Center
The Providence Performing Arts Center (PPAC) presents a full roster of touring Broadway productions and contemporary engagements. PPAC is a GBAC STAR accredited performing arts venue. There are no capacity restrictions, and all event staff are fully vaccinated. Located in the heart of Providence’s arts and entertainment district, PPAC is the second largest theatre of its kind in the country. The Loew’s Theatre Building, which is the historic home of PPAC, opened in October 1928 and has been applauded for its beauty and grandeur. PPAC is listed on the National Register of Historic Places and has been ranked by Pollstar as one of the Top Venues in the world. PPAC is managed by Professional Facilities Management and is the home of their corporate office.