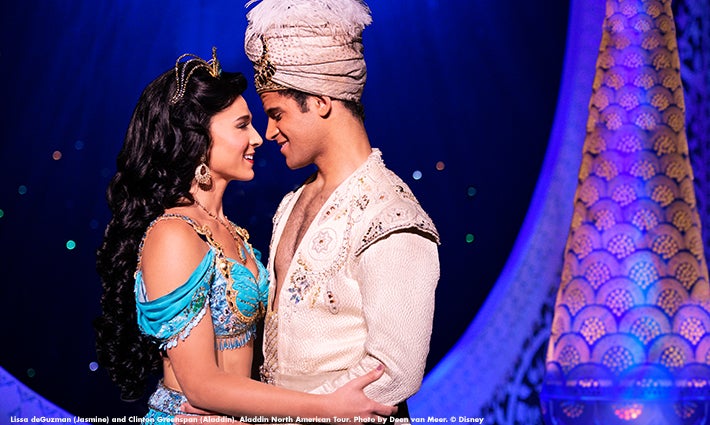 Tickets for Disney's Aladdin Go On Sale on Monday, September 9 at 10A

Providence, RI - Disney Theatrical Productions and the Providence Performing Arts Center (PPAC) announced today that tickets for the long-awaited engagement of Disney’s ALADDIN will go on sale to the public on Monday, September 9 at 10A. The hit Broadway musical will begin performances in Providence at the Providence Performing Arts Center on Tuesday, October 29 for a limited two-week engagement through Sunday, November 10.  The opening night is Wednesday, October 30 at 7P. In Providence, ALADDIN is part of the Taco/White Family Foundation Broadway Series.

ALADDIN will play Tuesdays and Wednesdays at 7P, Thursdays and Fridays at 7:30P, Saturdays at 2P and 8P and Sundays at 1P and 6:30P. ALADDIN will have a special matinee performance on Wednesday, October 30 at 1P in lieu of a performance on Thursday, October 31 (Halloween). VIP Ticket Packages, which include a prime seat location, a commemorative souvenir program and an exclusive merchandise item, are also available. Beginning Monday, September 9, tickets will be available at the PPAC Box Office (220 Weybosset Street, Providence, RI 02903), online at ppacri.org and by phone at (401) 421-ARTS (2787). Box Office Hours are Monday through Friday, 10A to 5P; Saturday, 10A to 2P and two hours prior to curtain time(s) on performance days.

BankNewport Family Night at ALADDIN is Wednesday, November 6 at 7P. Patrons who purchase a regularly priced ticket to the Wednesday, November 6 performance of ALADDIN will receive a complimentary ticket of equal value for a child/teenager up to age 18. Family Night tickets are available at the Box Office at 220 Weybosset Street in downtown Providence or by phone at (401) 421-2787 only. Family Night tickets are limited and are available on a first-come, first-served basis in selected locations. Golden Circle seating is excluded, and standard service fees apply. PPAC’s BankNewport Family Night media sponsors are ABC 6 and Coast 93.3.

Ticket buyers are reminded that the PPAC Box Office is the only official retail ticket outlet for all performances at PPAC.  Ticket buyers who purchase tickets from a ticket broker or any third party should be aware that PPAC is unable to reprint or replace lost or stolen tickets and is unable to contact patrons with information regarding time changes or other pertinent updates regarding the performance.

Aladdin, the hit musical based on the Academy Award®-winning animated film, opened on Broadway at the New Amsterdam Theatre to critical acclaim on March 20, 2014 and quickly established itself as one of the biggest new blockbusters in recent years, breaking 14 New Amsterdam Theatre house records; worldwide it has welcomed more than 10 million people and grossed over $1 billion. Its global footprint includes productions in Tokyo, Germany and on tour across North America.

Aladdin, adapted from the animated Disney film and centuries-old folktales including “One Thousand and One Nights,” is brought to fresh theatrical life in this bold new musical.  Aladdin’s journey sweeps audiences into an exotic world of daring adventure, classic comedy and timeless romance.  This new production features a full score, including the five cherished songs from the Academy Award-winning soundtrack and more written especially for the stage.

The animated film Aladdin was released by Disney in 1992 and was a critical and box office smash, becoming the highest-grossing film of the year.

The film won the Oscar for Best Original Score and introduced the hit song “A Whole New World,” which won the second of the film’s two Academy Awards as Best Original Song.  The Peabo Bryson/Regina Belle recording of the tune soared to #1 on the Billboard Hot 100 chart.